The old Port Kembla Exchange is reputed to be the last surviving intact step-by-step exchange in mainland Australia.

It appears that a small amount of equipment was salvaged - for example power equipment, which may have had a larger proportion of salvageable parts, but by-and-large the exchange appears to be much as it would have been when in use.

Robert Huisman has captured some excellent black-and-white images of the exchange equipment here.

The exchange is mentioned on the Commonwealth Heritage List, and the details of the listing can be seen here.  The listing status is shown as "Ineligible Place", which appears to happen when a Commonwealth place ceases to be in Commonwealth ownership or occupation during the assessment process.

Paul Blair shared the following reminiscence in relation to working with step-by-step equipment:

30 years ago as an apprentice my first field posting was at Kooyong exchange in Vic, where the Tech officer in charge of me, showed how to, then instructed me to clean 2 suites of banks using a kerosene based fluid and a bank cleaning tool, it took two weeks to complete along with constant wrist and forearm cramps from the side to side cleaning action required to polish the brass contacts to a gleaming lustre.

During those two weeks many maintenance and installation techs, with oddly puzzled looks on their faces, approached and commented on how well I was doing.

Whilst proudly admiring my handiwork of pristine shiny golden banks when completed, the Tech officer who first instructed me to clean the banks approached me with a huge smile on his face and noted what an excellent job I had done, then added the two suites were to be decommissioned and removed from service the following week to make way for two new AXE RSS’s.

Subsequently I declined his, and the other Techs following offers to view the exchange's “golden rivet”. 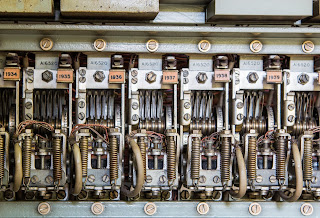 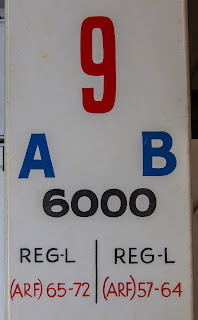 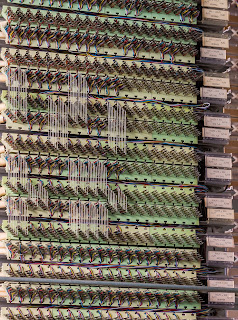 Many thanks to Brian Mullins and Geoff Gallaty of the Telstra Museum, Bankstown for flagging the unique value of the old Port Kembla Exchange, arranging access, and generously giving up their time to explain the operation of the equipment.  Any errors in the materials are of course solely my own!

A similar photo-blog in relation to the Sydney-Melbourne Co-axial Cable can be found here:  http://coaxrepeaterhuts.blogspot.com/